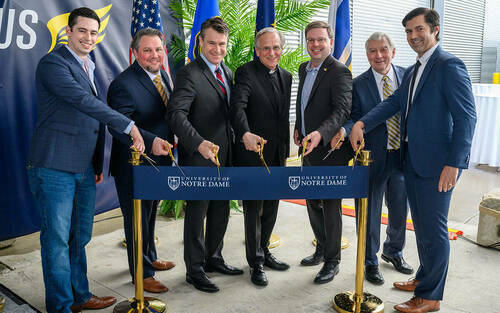 Along with partners Hermeus, an Atlanta-based startup developing hypersonic aircraft, and FGC Plasma Solutions, a Boston-based startup focusing on combustion technology, NDTL has developed separate facilities for ram engine and high-Mach combustion testing. Both are operational and will serve as a critical resource for development of high-speed flight engines and hypersonic aviation.

Sen. Todd Young joined University leaders and researchers as well as representatives from both companies and the Department of Defense today (June 6) at a ribbon-cutting ceremony to mark the official opening of the two facilities.

“The University of Notre Dame is very pleased to be able to offer some of the best test capability available for the important technology of hypersonics propulsion,” said Robert J. Bernhard, vice president for research and professor of aerospace and mechanical engineering. “Our faculty, students and staff are proud to be able to contribute to solving the immense technical challenges of powered hypersonic flight.”

Notre Dame, in collaboration with the Air Force Office of Scientific Research (AFOSR), currently operates the AFOSR-Notre Dame Large Mach 6 Quiet Tunnel and has designed a Mach 10 Quiet Wind Tunnel that is scheduled to be completed later this year and fully commissioned in 2023.

National interest in hypersonic flight has intensified in recent years. Getting passenger planes to travel at Mach 6 speed — six times the speed of sound — would revolutionize air travel. Passengers would be able to fly from Washington, D.C., to Los Angeles in under an hour, New York to London in less than two hours and Los Angeles to Tokyo in under four hours. The technology would also enhance the country’s strategic national defense systems, including hypersonic weapons capable of defeating conventional and future offensive threats, and allow military and emergency aircraft to quickly reach hotspots anywhere in the world.

The field of hypersonics research has focused much of its effort on external aerodynamics and boost-glide expendable vehicles, which can be used only once. NDTL will focus its effort on the propulsion systems for air-breathing, powered, reusable vehicles. The new test facilities build on Notre Dame’s Hypersonic Systems Initiative, conducting research related to all aspects of hypersonic flight, from structures and materials to thermal protection, energy storage, aerodynamics, signatures and long-range diagnostics.

“The opportunity to work with these two research partners was enabled by the NDTL facility infrastructure investment and the team’s expertise in designing and executing high-energy, high-complexity test programs,” said Joshua D. Cameron, director of NDTL and concurrent research assistant professor in the Department of Aerospace and Mechanical Engineering. “The new test facilities will not only support this leading-edge work by FGC Plasma Solutions and Hermeus, but will also provide a critical national resource for high Mach propulsion R&D.”

The ribbon-cutting event was part of Hypersonics Day at Notre Dame. In addition to celebrating the completion of the two NDTL hypersonic propulsion facilities, attendees had the opportunity to meet with leading researchers and engineers at the University as well as tour the AFOSR-Notre Dame Large Mach 6 Quiet Tunnel and the turbomachinery test facilities at Ignition Park in downtown South Bend. Representatives from Indiana’s robust hypersonics innovation ecosystem, including researchers from Purdue University and statewide government and industry partners, also met to discuss the region’s continued leadership in hypersonics innovation.

Representatives from the Department of Defense; Air Force Office of Scientific Research; Naval Surface Warfare Center, Crane Division; and the University Consortium for Applied Hypersonics also participated in a workshop to explore initiatives to strengthen and advance our nation’s hypersonics workforce.

Originally published by Jessica Sieff at news.nd.edu on June 06, 2022.