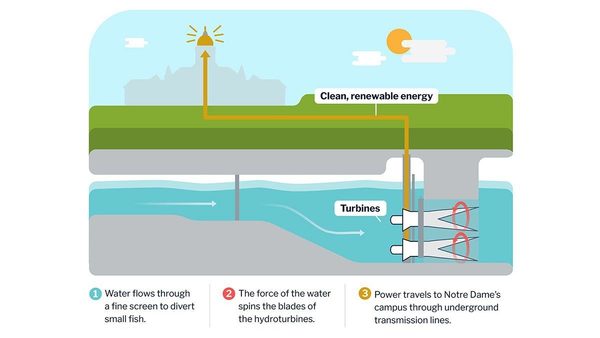 The University of Notre Dame and South Bend’s Venues Parks & Arts broke ground Monday (Aug. 19) on a 2.5-megawatt hydroelectric generation facility on the dam in the St. Joseph River in downtown South Bend. The facility, which will be primarily underground, is expected to generate about 7 percent of the University’s electrical needs and offset nearly 9,700 tons of carbon dioxide annually.

Per an agreement signed in 2016, Notre Dame will lease the site for 50 years after the city transferred a Federal Energy Regulatory Commission exemption to the University to operate a hydro power facility.

“In 2015, inspired and guided by Pope Francis’ encyclical Laudato Si’, Notre Dame renewed our commitment to reduce the University’s carbon emissions and join others in becoming better stewards of the Earth, our common home,” said Rev. John I. Jenkins, C.S.C., the University’s president. “Today we move another step closer to our sustainability goals with construction of this facility. We are grateful to the city of South Bend and all of our partners who are helping us harness the power of the St. Joseph River to bring clean, renewable energy to Notre Dame.”

The restoration of Seitz Park also kicked off in conjunction with the hydro facility construction. Notre Dame will pay the city $1 million to assist with the renovation of the park, which is adjacent to the dam. Initial concepts for the park’s redesign include a building with restrooms and a vending kiosk, a new performance area, improvements to the Riverwalk and a new park entrance.

South Bend Mayor Pete Buttigieg added: “This project speaks to a number of City priorities, including our commitment to sustainability, our ongoing improvements to the South Bend parks and trails system, and our strong partnership with the University of Notre Dame. It is another boost to the East Bank’s renaissance and helps mark the St. Joseph River as a key downtown asset.”

Hydropower plants capture the energy of falling water to generate electricity. Underground transmission lines will transmit the electricity generated by the new facility to campus. The hydro facility project is expected to be completed by the summer of 2021, while Seitz Park is expected to reopen by fall of 2021.

The hydro facility is one facet in Notre Dame’s wide-ranging sustainability plan, which is designed to eliminate the use of coal in the University’s power plant by the end of 2020 and cut its carbon footprint by half by 2030. The plan targets six key areas: energy and emissions; water; building and construction; waste; procurement, licensing and sourcing; and education, research and community outreach. To date the University has reduced its carbon emissions by 49 percent.

Originally published by Sue Ryan at news.nd.edu on August 19, 2019.