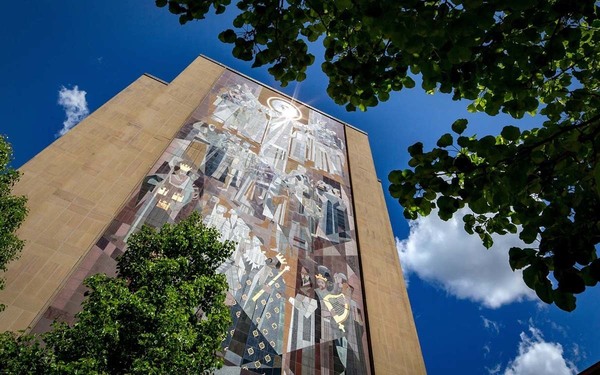 A few years before he died, Rev. Theodore Hesburgh, C.S.C., sat at his desk on the 13th floor of the library named after him, a cigar smoldering in the ashtray, telling jaw-dropping stories despite his diminished vision. One involved a future pope.

Father Hesburgh invited Giovanni Batista Cardinal Montini to Notre Dame in 1960 to preach at the baccalaureate Mass and receive an honorary doctorate. The two priests spoke Italian and took walks to every corner of the campus, building the foundation of their long friendship.

In his autobiography, Father Hesburgh wrote: “The new main library was just a hole in the ground at the time, and I described our plans for a new three-million-volume library.” On this day in his office, he told the rest of the story.

“Cardinal, you have to have faith,” Father Hesburgh told the future Pope Paul VI, flashing his trademark smile.

Fifty years later, the University began a major renovation project by looking back at Father Hesburgh’s original vision before re-imagining the library’s role for the next 50 years.

Originally published by Brendan O’Shaughnessy at news.nd.edu on April 20, 2020.